What Are Silver Art Bars?

What Are Silver Bullion Bars?

How To Identify Fake Coins On Ebay

What Is A Gold Unite?

How Much Silver Is In A Silver Dollar?

The Many Uses Of Silver

What Is Rose Gold

What Is White Gold

4 Of The Most Famous Lost Golden Treasures

How Much Treasure Is Still Lost?

What Is A Bullion Coin?

Bullion coins are coins made from precious metals such as gold, silver or platinum and which are used for investment purposes rather than as everyday currency. The value of a bullion coin fluctuates according to the current price of the metal it contains, rather than being "fixed" in the manner of a dollar bill or penny coin.

Bullion coins - such as Krugerrands, British Sovereigns and Canadian Maple Leafs are made at specific sizes in order to contain an exact amount of precious metal. A classic example is the United States Platinum "Eagle" (below) - and these contain one Troy Ounce of "fine" (i.e. at least 99.9% pure) platinum. 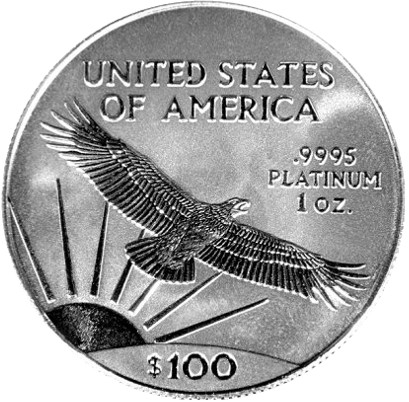 Typically, modern bullion coins are denominated in Troy Ounces - although they may occasionally be seen in grams / kilograms. Bullion coins will state the amount of precious metal they contain, for example saying something like "one ounce fine gold" - but this will not necessarily mean that the coin itself weighs exactly an ounce. For example, Krugerrands are made from 22 carat gold - 91.667% pure - and as such are made heavier than one ounce in order to contain exactly one Troy Ounce of gold. This can be slightly confusing - a modern "one ounce fine gold" bullion coin may not be made only of "fine gold" but contains exactly one Troy Ounce of "fine gold".

A British Sovereign is a gold bullion coin with a long and interesting history. The Sovereign was first minted in 1489 during Henry VII's reign - and the first sovereigns weighed half a Troy Ounce (240 grains) and were 23 carat - thus containing 230 grains of pure gold. However, the amount of gold in a sovereign was changed numerous times since then, eventually being fixed at 22 carat and 0.235421 Troy Ounces (113 grains) of actual gold, with the "Great Recoinage" of 1816.

Disclaimer - While every care was taken in the preparation of this website (www.troy-ounce.com) and its contents, no guarantee is made as to the suitability of this website for any purpose whatsoever, nor of the accuracy, timeliness or usefulness of its information. This website is provided for general information and entertainment purposes only and the information provided on this web site should not be seen as, nor as a substitute for, legal, business or investment advice. The website's owner specifically disclaims any and all liability arising in conjunction with the use of the materials / information herein.